Inuit culture means many things: language, communication, survival, spirituality, sharing, friendliness, food, family and creativity. Each of the 25 communities in Nunavut are slightly different, but the collective Inuit identity is one of kindness, compassion, giving, caring, helping, laughing, endurance, common sense and most of all responsibility.

Inuit culture and language are inseparable. Inuit culture has been passed on orally since time immemorial. There is one Inuit language across Nunavut and many different dialects. Inuit have always called themselves “Inuit” which means “The People” and Nunavut means “Our Land” in Inuktitut.

Inuit survival has depended on living in balance with the land, people and resources. Inuit have great respect for all people, for the environment, and every living creature. Inuit have had to be disciplined, practical, patient and most of all responsible for surviving the elements in the Arctic climate.

For information about Inuit culture and communities, please visit the following resources:

NTI's annual reports on the state of Inuit Culture and Society 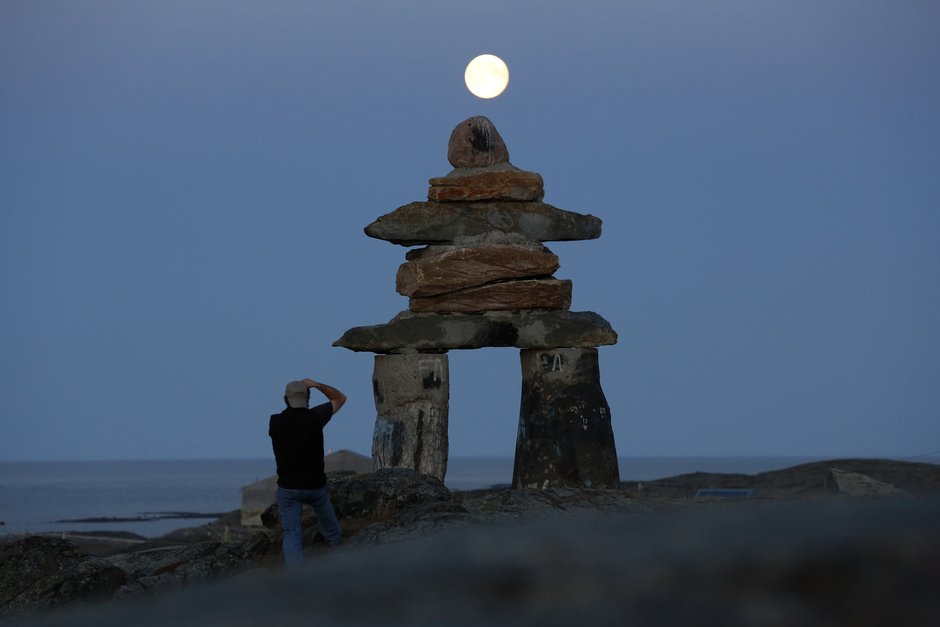 Spring is a time for seal hunting. When a seal is caught, it is a welcome event because it means fresh meat for all. It also provides seal fat oil for the qulliq (a soapstone oil lamp in the shape of a half moon) to provide light during the long nights of winter. With summer comes great excitement. Birds are hunted and eggs collected. Arctic char is caught and dried and berries gathered to supplement other foods. Caribou was also cut and dried for variety. While a handful of Inuit still travel by dog sled, all-terrain vehicles and snowmobiles have taken over for transportation. In the fall, caribou hunting and fishing for arctic char are cached away for the winter, which, because the shorter days allow for very little hunting, is a time for traditional songs, community activities and drum dancing.

Spirituality is a vital part of Inuit life. The spirit of Inuit has always been that of contentment despite hardship. Inuit have survived by being patient and spiritual people. In earlier times, many Inuit practiced shamanism. Inuit shamans had spirits known as “tuunngait.” These spirits were drawn upon to heal and cure the sick. Spiritual or shaman songs were sung at rituals and special occasions to rejoice in the good spirits and keep the evil spirits away. Good shamanism embodied the people’s attachment to the land and environment and respect for the land and the animals.

Today, many Inuit are members of Christian churches. The Anglican, Pentecostal and Roman Catholic faiths all have thriving congregations in many communities across Nunavut. 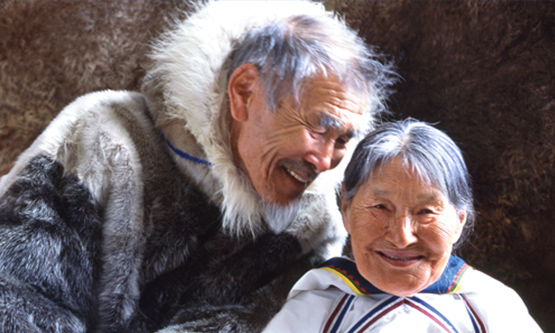 By having a culture of sharing, Inuit have survived for thousands of years. To this day, the Inuit still share many things with others: food, possessions, thoughts and words. Traditionally, homes were always open, and you were just expected to come in. It is difficult to imagine them knocking on an igloo!

There is no real word for “hello” in Inuktitut. When Inuit greet someone, they just smile. You must always return a smile or risk developing a reputation for being self-centred, grouchy or unfriendly. Communicating through facial expressions and other body language is also very common. For example, when someone raises their eyebrows, it means “Yes.”

Food is the connector to everything that surrounds Inuit culture. Country food, the food caught or collected on the land, is still the main diet choice of Inuit today. It’s more nutritious and less expensive than commercial food. Traditionally, every celebration included a feast. Feasts are very special because sharing food is an essential part of Inuit culture.

Inuit care for each other and family ties are strong. Everyone is treated as equal, regardless of his or her physical condition. Necessities of life are shared with those less fortunate to ensure survival. Children are taught by parents to treat others the way they would like to be treated — with respect. They are also taught the qualities of discipline and endurance to survive the arctic climate. Family is still a significant part of northern life.

Nunavut has a rich tradition of unparalleled creativity and artistic ability. The territory is full of talented singers, dancers, carvers, artists, storytellers and writers that help keep traditions and culture alive. Some examples of Nunavut artists include Riit, The Jerry Cans, The Trade-Offs, Northern Haze and Laakkuluk Williamson Bathory. Every year in Iqaluit, the Alianait Arts Festival brings together artists from across the territory and from Greenland.

Games are an important part of Inuit culture, including strength games, wrestling contests, throat singing and drum dancing. Traditional Inuit songs are mostly composed by hunters telling their experiences. A drum dancer would beat his/her drum to accompany a traditional song. These songs are both compelling and entertaining. Inuit enjoy humour and love to laugh and tell jokes. Storytelling is also an essential element in Inuit culture because it saves and enriches the language and culture. 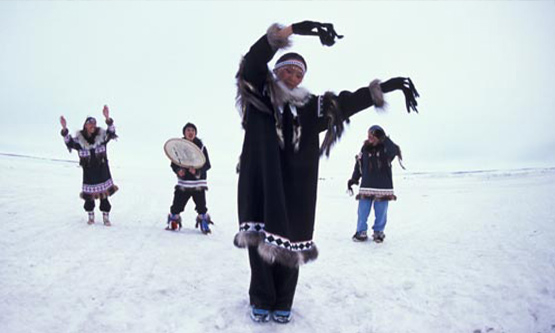 The act guarantees that unilingual Inuit will be given services in their language of choice. The legislation gives time for everyone — including government, businesses and community organizations — to get ready to provide Inuit-language services.